The Freedom of Forgiveness

The crime
November 3, 1991, was a beautiful fall day—cool, clear, and crisp. After church my brother, Jeff, and I shoveled down dinner and rushed out the door to play football with our youth group. Along the way to the game, we picked up some friends. Though only 17, I thought I was the best driver in the nation as I steered our car on to a local country road.

We crested a small hill and saw an Amish horse and buggy ahead of us (a common sight in Lancaster, PA.). I thought to myself, “I’m going to blow by these guys!”
I stomped on the gas, accelerating to 70-75 mph, steering the car into the left lane to pass the buggy. As we raced closer to the buggy, I will never, ever forget seeing the nose of the horse turning towards me, and I instantly knew they were trying to turn. I wasn’t even watching for their turn signal, nor did I see the small country road they were attempting to turn into.

Instinct took over as I slammed my foot down on the brake pedal. The brakes locked and the car skidded forward, tires screaming. We smashed into the buggy and I heard the pop of my windshield as it shattered into tiny pieces. The buggy flew over the top of my car and we rumbled to a stop in a field to the left. I wasn’t prepared for what I saw when I got out.

The man was yelling frantically, “Does anyone know CPR?” He was holding the crumpled form of the woman who had been his passenger. She had severe facial trauma and was convulsing.

My brother and his friend ran to a nearby farm to call 9-1-1 while my friend and I flagged down cars to get help.

Immediate aftermath
A policeman and an ambulance arrived, with my dad not far behind. When the policeman took my statement, I blurted out all the details hoping to get the burden off my chest. I feared I was headed for jail. The policeman sent me home with my dad, saying he’d follow up soon.

As my dad drove home he said, “You've been through enough. We're not going to make it worse for you.” Once home, I spent the next half hour crying on my mom’s shoulder. As the news got out, family and friends showed their support by coming over to our house to pray. The situation was bad, but it was about to get worse.
That evening, the police told us that the Amish woman had needed life support to stay alive, but since the Amish don't believe in life support, she died in the hospital. The Amish lady, he told us, was the man’s wife. Even worse, she was his new bride, and they were on their honeymoon. They had been married for 5 days; he was 21 years old, she was 19. Their wedding bliss was ruined. She was dead, and I had killed her. It was the worst day of my life.

Facing forgiveness
That next evening, my parents decided we would attend the viewing. Nervous pain ripped my gut, and wild scenarios played out in my mind. Would these people come pouring out of their house with shotguns aimed at me? When we arrived at the farm, we saw Amish buggies parked all over the place, heightening my fear.

Then the moment came to enter the house. The young woman’s parents met us in the front room and wrapped their arms around me. Through tears I muttered how sorry I was, and they spoke the most incredible words to me, “We forgive you, we know it was God's time for her to die.” Then they went even further—they invited us over for dinner!

In another room the husband, Aaron Stoltzfus, stood beside the open casket of his wife, Sarah. Aaron, too, came to me with open arms.

He simply forgave me. As we hugged, the freedom of forgiveness swept through me.

The Stoltzfuses had us over for dinner that next month, and never once showed any kind of resentment. On the contrary, it was the beginning of a meaningful relationship. In their forgiveness, they opened their home and hearts to us!

Still a minor, I was charged with vehicular homicide, which meant I would lose my driver’s license for three years, pay court costs, and be on probation until I completed 200 hours of community service.

To me, with Sarah’s life gone because of my actions, it was an extremely lenient sentence. To the Stoltzfuses, it served as another instance to demonstrate forgiveness. They wrote letters to the judge asking for my pardon! Because of the severity of the crime, however, the judge gave me the complete sentence which I served in full.

Moving forward
The freedom of forgiveness requires follow-up, restoring a broken relationship or creating a new one, no matter how difficult. Our relationship with the Stoltzfus family continues to grow. We’ve visited every year near the anniversary of the accident.

My wife and I even invited them to our wedding and they came.  Only five years earlier I shattered their hopes and dreams, yet they joined us in celebrating ours.

The Stoltzfuses have taught me that forgiveness is not always a one-time event, but ongoing. Through their consistent forgiveness, I now understand what Jesus meant when He said we should forgive others “seventy times seven” (Matthew 18:22).

Joel and his wife Michelle started at Faith Church in October 2002, and he became senior pastor in July 2008. Joel graduated from Lancaster Bible College and Evangelical Theological Seminary. Prior to coming to Faith Church as Youth/Associate Pastor, they served one year as church-planting missionaries in Kingston, Jamaica. They are the parents of four children.  In his free time, Joel will probably be reading a book, listening to U2 or REM, playing sports or Legos with his kids, enjoying a movie with Michelle or rooting for the Phillies or Redskins! More likely you'll find Michelle and Joel talking about God's heart for the oppressed and how Americans can live the Gospel. They are so excited about how Faith Church is becoming a church that beats after God's heart, removing the chains of injustice, freeing the captives, preaching the good news, feeding the poor, discipling the believers, praying for the world.
Crime Death Forgiveness Reconciliation
The Rock + a Hard Place
This site is a collection of real stories by real people about The Rock in their hard places. It is curated and edited by Kara Ranck, who is a wife and mother of two children living in Pennsylvania. Kara herself has traveled some hard places in life and knows there is hope and power when we tell our personal stories about The Rock, which brings us through. Thank you for joining us here!

Bringing Brian Back- Part 1 of 3

By Amanda Miller
One of my husband’s characteristic sayings is, “What’s the worst that can happen?” It’s meant to dissuade anxiety or unrealistic worries, and it used to help a little.
Until one day, the worst did happen.
Brian was ran over by a tractor.
Actually, he was run over by the farming implement the tractor was pulling — a 20-thousand-pound no-till drill, a heavy beast fitted with rows of sharp discs meant to plow through hard-packed Kansas soil.
The tractor kept going, until it lodged itself in a grove of trees in the middle of the section, a quarter mile from the dirt road. So by the time anyone started to be concerned at Brian’s absence, it was already getting dark.
I was at work, and normally I would have tried to be in contact with Brian several times throughout the afternoon and evening, but I was in the throes of prepping for and teaching a cooking class and didn’t notice that there was no response to my single text. I had no idea it had already been almost five hours by…
Read more

Bringing Brian Back- Part 2 of 3 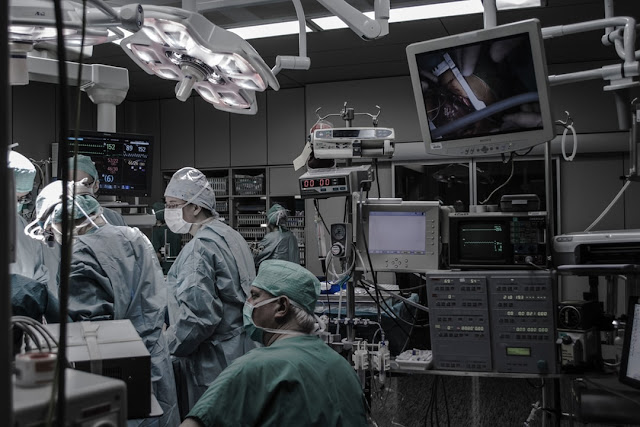 
Alone I stumbled back to IMU to frantically pack up our things; alone I crumpled, sobbing, into a corner in the much-too-familiar ICU waiting room; alone I pleaded for updates while they still wouldn’t let me see Brian.

This was one of the only days I was alone. It feels a little cruel that this of all times was when no one was there with me, but (especially after the fact) I can see the grace in it. In all reality, I was only by myself for a couple hours — the hours of crisis when I had no idea what was happening with Brian or if it was all over. There was no one to distract me, comfort me, strengthen me—no one to lean on but my God. The other crises I always had people to bolster me, but this time I only had God...and he was enough.

Brian made it through the day, and over the next day or two showed small signs of progress — before he started tanking again. His lungs started shutting down, and in a horrible progression he went from room air to a bi-pap mask to the venti…
Read more