By Ryan Forbes
June 15th, 2003 I was staring out of the window of my prison cell lost, hopeless, and void. Void of anything even remotely resembling love. As I continued to gaze at the dimly lit street outside of my window, I remember thinking about my Dad, about his life, and his battle with alcoholism. Not completely sure how I knew, but I was acutely aware that his childhood and his upbringing was probably not the greatest experience, and that my family of origin was steeped in the dysfunction of the collective abuse and trauma of generations past.

I was angry. I was tired. I was lost.

During that era of my life, I was in my early twenties and used to listen to a rock band named, Staind. The group had an album at the time named “Breaking the Cycle.” As I was recalling my life and the path that I had been going down—I remember thinking about the name of the album and thinking that I wanted to “Break the Cycle.” Break the cycle of drug and alcohol addiction. Break the cycle of physical abuse, mental & emotional abuse, and sexual abuse. Break the cycle of unresolved trauma. It’s as if my soul, my being, my very heart was screaming—HELP!!!  Somebody HELP me!!!  I don’t know how to live!

All at once I began to have visions flash through my mind’s eye of what looked to be like a community park setting—people were there playing, laughing, and loving. My heart swelled up! I was overwhelmed with what looked like a flash of heaven—the original intention or the original design of a loving creator, our Father—a Good Father. Then, my back was up against the wall behind me, and I was aware that my mouth fell open. I was in this awestruck state for what felt like minutes. It’s as if the ceiling to my prison cell as removed, and I was enveloped by the most tender, sweet, loving, tangible presence I had ever felt in my life…I was enveloped by love, held by grace, and surrounded by mercy. And the name, oh the NAME…the name that erupted from my heart…was the beautiful name of Jesus! I knew beyond a shadow of doubt that I had met God—I knew that I had met my Lord, Jesus Christ.

I was forgiven! I was cleansed, and I was free! Totally liberated in the most confined space on the planet—I had found what my heart was searching for. Purpose. Hope. Love.  Jesus!

For four or so years after being released from prison that time, I had many ups and downs in my walk with Jesus, but that is a story for another time (maybe another blog). I spent a total of three years incarcerated, seven different times! I served time on both the county and state levels.

Growing up in a small town, it seemed like everybody knew of my name, and my shame—especially the police officer that seemed to be the one that was always arresting me—Officer Wendell Metzler.

During the annual New Holland Farmers Fair in 2007, as I was walking around enjoying the festivities (a place I was previously arrested in 2002) and my new life in Christ—I felt a prompting from the Holy Spirit. “I want you to make amends with Officer Metzler,” I heard. I brushed the voice away and began to make arguments in my mind as to why this was not a good idea. It would appear that God had a different plan!

I heard the prompting again and again, until I knew that I had to act on it. At one point during the evening, I saw Officer Metzler on bicycle patrol riding across main street, and I knew it was my opportunity. I waited for him to get off his bike, and I approached him. I cannot tell you how afraid I was. It’s as if I was confronted with everything that I was all in one moment in time. I owned it! I owned my mistakes, and took responsibility for myself and my actions—I asked for forgiveness.

After a 30-minute conversation, Wendell (Officer Metzler) had given me his personal cellphone number, and asked me to call him if there was ever an opportunity to do anything positive to affect change. Wow God!! I was astounded! As I walked home from the fair that night elated, I heard the Holy Spirit again, “Ryan, it’s going to change the face of the community.” I was on fire!

I’m still not sure what that exactly means twelve years later, but I do know this. Today, Wendell and I are best friends. We travel to different churches and groups to share God’s story of forgiveness in our lives. Wendell served as best man in my wedding! He trusts me with his family. We are brothers. 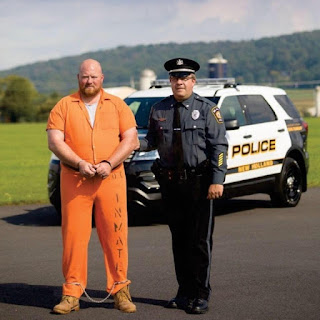 Abuse Forgiveness Guilt Incarceration Mental Health Substance Abuse
The Rock + a Hard Place
This site is a collection of real stories by real people about The Rock in their hard places. It is curated and edited by Kara Ranck, who is a wife and mother of two children living in Pennsylvania. Kara herself has traveled some hard places in life and knows there is hope and power when we tell our personal stories about The Rock, which brings us through. Thank you for joining us here!